What is Gaza Unlocked?

For over a fifteen years, two million Palestinians in Gaza have lived under a brutal military blockade imposed by Israel.

Gaza Unlocked is a project of the American Friends Service Committee, offering analysis, stories, and background information about Gaza. The project seeks to raise awareness and provide resources for those wishing to organize in solidarity, take part in events and protests, engage elected officials, and work for an end to Israel’s blockade on Gaza.

About the Gaza blockade

For over 15 years, the people of Gaza have lived under an Israeli-imposed blockade that severely limits travel, trade, and everyday life for its over 2 million residents.

The blockade was first imposed on Gaza by Israel in 2006 after Hamas won the Palestinian elections. It was tightened in 2007 after Hamas took control of Gaza and split from the Palestinian Authority in the West Bank. The blockade effectively bans nearly all exports from Gaza, severely limits imports to Gaza, and closes the Gaza border for exit by Gaza residents and entrance by others.

The impact of the blockade has been devastating. Today, Gazans don’t have reliable access to clean water, electricity, and many other services. Construction is limited, hospitals are under-resourced, school systems have degraded, and the economy has been destroyed.

The United Nations and International Committee of the Red Cross have both declared the blockade to be an illegal form of collective punishment against the Gaza population. The blockade must end, but change will only come through political action.

Gaza Unlocked highlights the stories of how Palestinians in Gaza are affected by the blockade, as told in their own words. Explore their stories, learn about the issues, and join us in taking action to bring an end to the blockade.

The blockade has devastated the people of Gaza, affecting all aspects of life. According to the U.N.:

The U.N. has declared the Gaza blockade an illegal form of collective punishment under international law.

In 2006, Dov Weisglass, advisor to then-Israeli Prime Minister Ehud Olmert, said that restrictions on Gaza were imposed to "put the Palestinians on a diet, but not to make them die of hunger." Restrictions and blockade followed Israel’s 2005 redeployment from Gaza, as it abandoned Israeli settlement in the territory in order to implement greater control and isolate it from the rest of Palestinian territory. Israel justified increasing restrictions and blockade on the 2006 election of Hamas in Gaza. And yet after a decade and a half, it should be clear that Israeli justifications for the blockade do not stand up to scrutiny: the blockade has not weakened Hamas, brought “security,” or stopped violence. Instead, the world has witnessed four major Israeli wars on Gaza featuring massively disproportionate violence by Israel, and the transformation of the Gaza Strip into an unlivable territory.

Israel has treated Gaza as a laboratory for testing new weapons and methods of control: new technologies of surveillance, drones to spray “skunk water” and teargas, experimental explosives, “smart fences” and other forms of spatial control. Israel’s arms industry, a primary sector in its economy, then exports these technologies to other regimes around the world.

This targeting of Gaza’s population is what led the U.N. and International Committee of the Red Cross to declare the blockade an illegal form of collective punishment under international law.

The blockade must end. 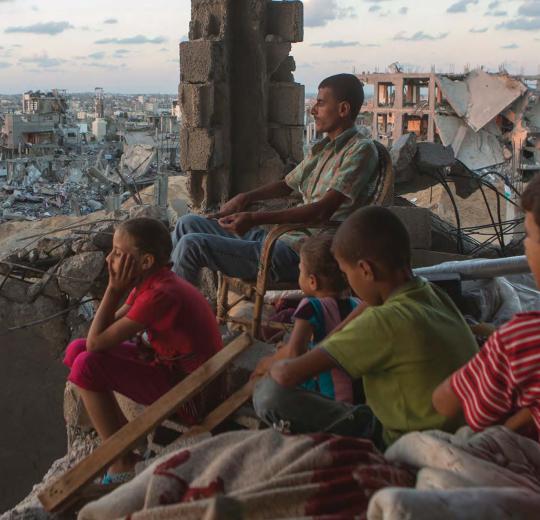 For over 15 years, the people of Gaza have lived under an Israeli-imposed blockade that severely limits travel, trade, and everyday life for its 2 million residents.