Rafah, the southern city of the Gaza Strip, is populated with more than 250 thousand residents living in 64 sq. km. It is bound on the west by the Mediterranean, on the east by the 1949-armistice line, and on the south by the Egyptian-Palestinian borders. 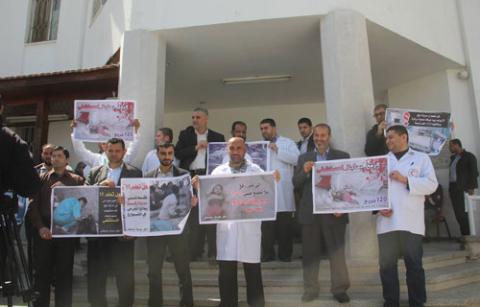 After Rafah had faced three-deadly wars on the Gaza Strip with no hospital to suffice the needs of more than 250 thousands of residents in a densely populated area, activists, journalists and officials have launched a large-scale campaign to fund the construction of a medical complex in Rafah. The campaign also included organizing press conferences and various activities in many areas to highlight the medical needs of the province.

The first action was launched on Friday evening under the hashtag #RafahNeedsHospital, marking the beginning of a series of activities aimed at realizing the idea of establishing the badly-needed medical complex during the past 4 years. A large number of tweets were posted calling for further engagement and participation in the campaign, and shedding light on the desperate need for a central hospital in Rafah.

The hashtag has been launched in response to the massacres committed in the Gaza Strip on the first of August in 2014, when the Israeli military unleashed intensive gunfire and shelling after the Israeli soldier Hadar Goldin went missing. Activist Abu Abdullah Lafi said, "During the 2014 war on Gaza, residents of Rafah were victims of the Friday massacre during the Israeli aggression on the Strip and literally could not find a hospital". The heavy gunfire and shelling led to the killing of about 140 Palestinians in one day, out of 443 killed in Rafah throughout the 51-day aggression. The aggression also led to the injury of thousands who hardly received medical treatment due to the lack of a hospital in the area, especially after shelling of Abu Yousef al-Najjar Hospital and isolating Rafah from Khan Younis.

Two hospitals provide medical services to the population of Rafah district, Abu Yousif al-Najjar Hospital and the European Hospital. However, while the former is limited by a lack of equipment and small size, the later is difficult to access, especially during wars, because of its location east of Khan Younis and its proximity to the border-fence with Israel.

"Do Justice to Rafah. I address all officials in the government in the charity institutions in the national and Islamic forces. Rafah is the only city where there is no hospital; al-Najjar is actually a clinic and not a hospital."

The months following the war have seen further difficulties, with hospital staff, including doctors and nurses, protesting withholding their salaries. Hospital cleaners and other staff have gone on strike on several occasions, angry that despite the amount of work they put in during the Israeli assault to ensure that hospitals and clinics continued running, officials have still failed to pay their salaries. The workers used to be paid by the Hamas-run government in Gaza, and since Hamas and the Ramallah-Palestinian Authority are at odds over responsibility for payment of salaries in the Strip, many civil servants have either lost the entirety of great parts of their salaries over the past few months.

Large swaths of the Gaza Strip remain in ruins following the 2014 war, which killed more than 2,400 Gazans and left 100,000 homeless. Only a third of the 11,000 homes destroyed in the 2014 war have been rebuilt, the Norwegian Refugee Council estimated.

According to Rafah activists, planning for the construction of a medical complex in Rafah started back in 2014, after the third deadly war on Gaza, by a committee called Friends of Rafah Medical Complex formed by a number of social figures. The campaign concentrates on funding the hospital, hoping that this project will be adopted by the Qatari grant for the reconstruction of Gaza.

The committee said that the project will be handed to the Palestinian Ministry of Health after its implementation. The ground allocated for the project is located along Abu Bakr al-Siddeek St. in the western area of Rafah, and it can be reached easily as it is not in a crowded area. It provides a possibility for future expansion, the proper environmental conditions are appropriate with a suitable sea view, and the needed infrastructure is available in the area.