Gaza: A Lab and Showroom

This week the "Hamushim" a joint program of AFSC and the Coalition of Women for Peace in Israel published a new report titled "A Lab and a Showroom" on the Israeli military's use of new weapons against protesters in Gaza. 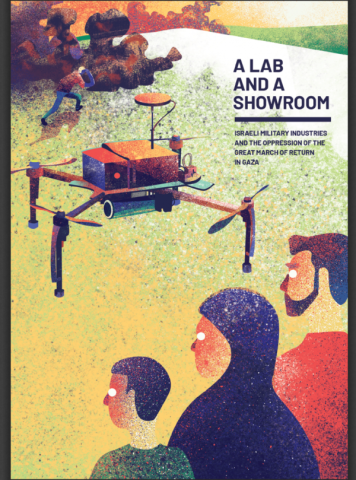 This week the "Hamushim" a joint program of AFSC and the Coalition of Women for Peace in Israel published a new report titled "A Lab and a Showroom" on the Israeli military's use of new weapons against protesters in Gaza.  The Israeli military has long used its military operations in Gaza as opportunities for testing new weaponry, and the Great Return March has not proven an exception.  The new report, which can be read here, details how the Israeli military has weaponized drones used in Gaza, using them to drop tear gas, spray "skunk" water, and fire live ammunition at protesters.  The report also provides details on the weapons and force used by Israeli military snipers in response to recent protests.  While many of the weapons discussed in the report are new, given history we can expect that these weapons will now be used as tools of repression in the West Bank and other parts of the world.

The violence that occurred during the Great Return March resulted in 112 Palestinians killed, 13,190 injured, of which 7,618 were injured by live ammunition. Individuals, groups, politicians and diplomats around the world vigorously argued against the use of violence against these protests, as Palestinians in Gaza desperate for respect and validation of their humanity in the face of blockade and oppression, called out for their rights. Human rights organizations in Israel filed multiple emergency petitions to gain access to the protocols for the use of violence used by the Israeli army, but they were denied on the grounds of the court trusting the Israeli army’s claims that they were only using live fire as a last resort. What has come into view since, and what this report highlights, is how violence against Palestinians in Gaza creates profit for the Israeli security apparatus.

Some of the most startling findings of the report document how countries including Germany, India, Croatia, Azerbaijan, and the United States all directly factor into a cycle by which technologies used against protestors in Gaza are marketed and purchased abroad, citing having been “battle-tested” in Gaza. Notably, in April a privatized branch of the Israeli military called the IWI presented the Tavor sniper rifle at a weapons conference in India. Israeli army forces use the Tavor rifle alongside the American Remington M24 rifle when firing on protestors in Gaza. These rifles leave massive wounds that reach up to half a foot, and their use led to deaths, amputations, and other severe injuries for protesters in Gaza. Already the official rifle of the Indian special forces, it was soon announced that the Indian army would be making another purchase for these rifles. Eli Gold, an executive for IWI, attributed increased sales of their products to their use in Gaza. In addition, the German military entered into a $600 million deal with the Israeli drone producer IAI to supply combat drones, whose radar technology the Israeli army used in the recent operations in Gaza. Alongside weapons conferences held in Israel before, during, and after the protests in Gaza, these purchases reveal a system of incentives by which technology is produced for oppression, tested through oppression, and purchased for oppression.

In 2014 AFSC's Israel program launched a research project named "Hamushim" (Armed) which looked at the economic impacts that Israeli militarism had on Israeli society.  The campaign included a social media component that shared information with the broad Israeli public and raised up concerns about militarism, occupation, and the Israeli global arms trade.  In 2015 AFSC began partnering with the Israeli Coalition of Women for Peace (CWP) on this project and it now works to expose the true human price of the Israeli military industry and arms trade, as well as to mobilize actions against it.

The Hamushim project continues to produce research on the impacts of Israeli militarism and the global Israeli arms trade.  This research and related activism has helped end some Israeli weapons transfers to global human rights abusers like Myanmar and South Sudan.